Sponsored by Northwest Territories and Nunavut Association of Professional Engineers and Geoscientists (NAPEG).

Hiking the Thelon Esker: 40 days of travel across the Northwest Territories tundra 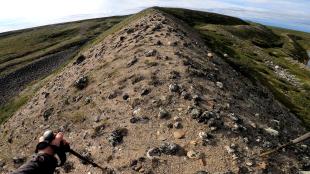 In the summer of 2020, Dwayne Wohlgemuth hiked nearly 800 km over 40 days along the Thelon Esker in the NWT, aiming to put this relatively unknown geological feature on the map. In 2019, Dwayne learned about the esker by reading a blog post written by Dave Olesen, a pilot living on Great Slave Lake’s McLeod Bay. At that point, after living in Yellowknife for 13 years and having canoed many journeys through the NWT, Dwayne had never heard about this esker. What better way to make this esker better known than to hike it? The Royal Canadian Geographical Society agreed and chose to fund his expedition as the Society’s 2020 Expedition of the Year. 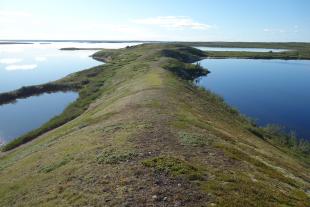 hiked northwest along the snaking ridge of glacial river sediment and crossed the Thelon, Hanbury, Back, Coppermine, Starvation, and Emile Rivers. He crossed the Ekati Diamond Mine lease, made a pit-stop at the Tundra Ecosystem Research Station (Tundra Science Camp) on Daring Lake, and watched the geese fly south, while near the Starvation River where several of Franklin’s men died 200 years ago while returning from his First Overland Expedition to the Arctic Ocean.Many difficult days of black flies, bogs, jumbled rocks, willow-choked stream crossings, and grizzly encounters were all worthwhile for the gorgeous scenic esker views, the elevated view of the tundra, the musk-ox and moose, the berries, the mushrooms, and the tasty ground squirrels. Dwayne took about 3,500 waypointed photos of the esker which he passed along to researchers at Carleton University who are studying the esker. He also tracked his hike by GPS and took extensive notes and kept a journal to evaluate the esker for future eco-tourism opportunities. A short film of the hike, titled The High Road, was selected for the 2021 Banff Mountain Film Festival.

Join this talk to see the Thelon Esker through Dwayne’s eyes, to learn a bit about esker formation and why eskers are so important, to hear tales of grizzlies and bugs and caribou, and to better know the tundra of Canada’s far north.

Dwayne spent his youth on a farm in northern Alberta, completed an engineering degree at the University of Alberta, and spent a couple years travelling and learning French and Spanish before moving to the Northwest Territories in 2006. He realized that the wilderness around Yellowknife was most accessible by canoe, and immediately ordered a new canoe. He has completed many multi-month canoe trips since then, first with his spouse Leanne and more recently with two young sons as well. He and his spouse Leanne completed a couple long hikes including a 480-km hike on the Arctic Coast from Kugluktuk, Nunavut to Paulatuk in the NWT, and the 350-km Canol Trail in the NWT’s Mackenzie Mountains. In 2019 Dwayne and his family completed a 107-day canoe trip through the NWT and a film of the trip, titled Family Routes, is available through Amazon Prime. The Thelon Esker hike was Dwayne’s first long solo adventure.